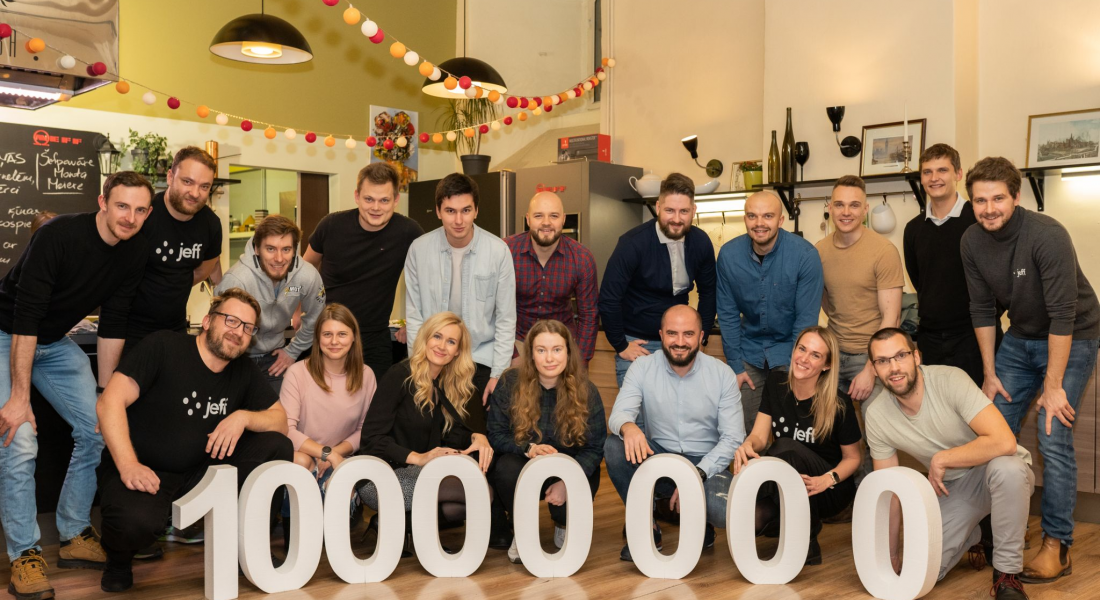 For most of his career, Toms Niparts has been connected to startups and fintech. Shortly after finishing undergraduate studies, he relocated to Spain and spent the next four years working there. He launched several projects from scratch, managed a team of 50 people – while studying the local language. “I was thrown into an uneasy situation which ended up being a great experience – there was an opportunity to make mistakes in pretty much every aspect of the business, learning to do better next time around,” Toms reflects on those early years of his career. It was during this time that the concept of Jeff App would be born.

Jeff in a nutshell

Jeff was launched in early 2020. In 2021, the team raised $2.5M which placed them in the top-10 largest investments received by the Latvian startups in that year.
“The more I work on Jeff, the more I understand the saying – you can only connect things when looking backward,” says Toms. “Now I realize that disruptive ideas don’t come from the wish to start a business because you want to, but from experiencing a problem, figuring out a solution, and that solution not letting you sleep until you work on it.”
In the case of Jeff, the problem is that people in certain emerging markets like Latin America, Africa, and Southeast Asia don’t have the traditional financial data, while still having a digital footprint. Jeff builds an alternative credit score by turning this digital footprint into data, and offering this data to partners like banks or insurance companies. Users get access to loans and other financial services, while partners can safely expand their client base into a part of society for which there previously was no way to measure creditworthiness.
“I realized that while I don’t want to keep operating on the lending side, I do want to stay in fintech – because it is a very dynamic and interesting industry,” says Toms. “Capturing and analysing these data points is a lot of work and it makes sense that it should only be done once and then distributed across the market. And that is how Jeff was born. Our mission is to make financial services more accessible.”

Deciding on where to begin

When considering where to bring Jeff, Toms realized that he does not know much about Africa, and while there is a strong connection to Latin America through his experience in Spain, this problem was not as prevalent there. That left Southeast Asia, where he had experience in three markets - Vietnam, Philippines, and Indonesia.
Indonesia might be the biggest and most attractive fish in the pond, but the regulatory landscape there is very complex. Because of that, the better idea was to first target a market which is easier from that standpoint and later return to Indonesia with a working proof of concept. Philippines has a relatively shallower supply side, which left Vietnam as the ground zero for Jeff. Toms emphasizes that in hindsight this has worked very well – Jeff team, as of the January of 2022, is in the home stretch of earning the license to operate in Indonesia.

Jeff App is past its 2nd year of active operations – and it’s not easy to be a marketplace. There is a lot of juggling and balancing of demand and supply sides – for everything to work and be scalable. All of that becomes even more complicated during a pandemic, which started only a couple of months after Jeff was launched.
While it might seem inconvenient to have most of the team being based outside of Asia, Toms believes that Jeff has proven that this kind of structure can work. “We combine the best of both worlds – there are big market opportunities in Asia, while in Eastern Europe we have some of the most skilled and hard-working people in software engineering, data science, digital marketing, and other digital fields,” he explains.

Vision of the future

In late 2021, Jeff had 15 employees, while right now – the second half of January 2022 – the company is onboarding its 30th team member. The rapid hiring comes with a lot of strategic changes. Toms believes that in some ways, Jeff has been “re-launched” – with new needs, new targets to fulfil, new strategies, and how the founders of Jeff are gradually giving away ownership and responsibilities. As such, the short-term goal of Jeff is to solidify the team.
Toms was also very excited to talk about a new partnership that was finalized in the first week of January – between Jeff and the biggest mobile wallet in Vietnam with over 30 million active users. In his words, it’s like if a startup in Latvia partnered up with Swedbank, just in a country with a 50 times larger population.
Over the last year, Jeff saw more than 12 times revenue growth and Toms hopes to achieve a similar figure in 2022. It’s ambitious but he believes it’s fully achievable with the geographic expansion, new partners like the aforementioned mobile wallet service, the products on Jeff’s roadmap, but most importantly the heavily upgraded team.

Be honest with yourself

“In the middle of 2019, when I was still employed in my previous full-time job, there already was a clear plan for Jeff,” Toms says. “Together with my friend and co-founder Reinis Tenis, we were trying to validate the concept in our free time after work hours – our idea was to start in Latvia and Spain because we know the markets and have valuable connections. Once we finished our proof-of-concept, we would go to Asia. But eventually we had the realization – what the hell are we thinking? Why are we going about our business like that? It makes no sense – these markets are completely different and the problem we are trying to address does not really exist here in Europe. We stopped telling lies to ourselves and just got started – resigned from our jobs and went straight to Asia.”
Of course, it wasn’t easy – there were several situations where Jeff was balancing its runway. Toms says that it’s similar for most entrepreneurs – you can find ways out of seemingly dead-end situations by just not giving up: “If you want to expand into markets like Southeast Asia, don't do it for the sake of chasing the wave or because that is the trend. At the end of the day, you cannot lie to yourself. Have a sound, sensible reasoning and arguments to go exactly there. And if you have a good enough answer for yourself, just get started.”